Is Success Worth It? The costs of being underrepresented in tech.

Home/Let's Talk/Is Success Worth It? The costs of being underrepresented in tech.
Previous Next

Is Success Worth It? The costs of being underrepresented in tech.

Though upward mobility represents the epitome of the American Dream, research shows that professional success has high costs on the emotional and psychological well-being of those who come from underprivileged backgrounds.

As a biracial psychotherapist in San Francisco, I am no stranger to witnessing the psychological and emotional impact of being underrepresented in tech. I have been interviewing women of color as part of an ongoing exploration of the trend towards increasing diversity in tech. Their stories confirm that data: Upward mobility comes with a steep price.

Up until recently, Mariah* was the only person of color on a team of over 600 in one of the largest tech companies in the world. To say that Mariah’s presence in tech is unique would be an understatement. Not only is she Black and a woman, but she also grew up in the inner city and did not get her bachelor’s degree until after she was hired. Despite being self-taught, Mariah created and sold her first company before she reached her 30th birthday.

By all measures, Mariah is a success story. Yet, this success takes its toll.

“You have to be above and beyond the norm to get there and I feel that every day,” Mariah said when speaking of what it took for her to make it in tech.
According to The Atlantic, research supports Mariah’s experience. Individuals from marginalized backgrounds who use self-control to get ahead have higher blood pressure, increased fat levels and more stress hormones than those in similar communities who stick to the status quo.

For upwardly mobile women of color in tech, the daily stressors are above and beyond those of their colleagues from more affluent backgrounds. Not only do they have to be highly skilled in a competitive market, but they also have to negotiate the constant assumptions, misconceptions and confusions that come with being the “token” person in an environment where, as one woman put it, “no one looks like me.”

“Last year, I would come home crying – fed up – having to negotiate every exchange and experience,” says Carly, a 25-year-old Afro-Latina woman, as she recalls the struggle of going to work after hearing about another police shooting of a Black man. To wake up each morning and feel the weight of these monumental events and then spend the entire day in a work environment where nobody else seemed to notice, much less care, at times felt like too much for Carly to withstand.

In 2015, African American women made up 3% of the information technology workforce in the U.S.. Hispanic women fared even worse with a 1-2% representation. Each woman I interviewed described the feeling of isolation that comes with being in tech. Many described the experience of having to put on a facade throughout the work day, as their genuine thoughts, feelings, impulses and responses were not welcome.

“Mimicking their ways,” Carly tells me when describing what it feels like to engage with her colleagues. Much of her energy goes toward figuring out the “appropriate” responses when encountering her more privileged co-workers. “Okay how am I supposed to react to this, to react like this is everyday life… act like it was normal, to act like I understood this lifestyle? I was constantly code switching.”

Veronica, a Mexican woman in her 30’s describes the emotional difficulties of her rise in tech. “When I was starting out, it was a rough market. Self esteem suffers. I thought, ‘I have no experience.’ With my peers, they were wealthy, they could just live and figure things out.”

The dilemma is clear.
The trend to increase ethnic diversity in tech is inarguably a positive one. Yet, at the same time, this very trend has 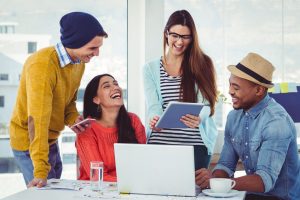 negative consequences on the health and well-being of those people of color who are at the forefront of this movement.

Though it can feel like a no-win situation, there are things you can do as a POC in tech to increase your wellbeing.

It can be crazy-making to feel like you’re climbing a huge mountain each day, while your colleagues from more affluent backgrounds are merely taking a stroll. You’re not crazy! That is actually happening. According to the Atlantic, you really are working harder than your coworkers while seeing fewer rewards.

It is well documented that acknowledgment of trauma decreases its negative impacts. That is, when our friends, family, and society recognize our struggle, we not only feel better, but are able to engage more effectively with the world around us. It is vital to surround yourself with like-minded individuals who recognize and applaud your role as a pioneer in this field.

Despite the challenges, the women I interviewed felt that, at the end of the day, the benefits outweighed the costs. I asked Tallia, a 20-something African American woman, why she continues to press forward, despite the hardships.

“At my lowest times, I think, why did I have to sign up for this? Is it worth it? Then I have to tell myself to take a deep breath.” She pauses here before continuing. “Hopefully all of the hard work of the current cohort will pay off for the next wave.”

“Yeah, you can do this,” Tallia reminds herself in her darkest moments. “It’s not easy. There aren’t a ton of us. Yes, you can do it because you’re human and humans can do what they set their minds to do.”

*Some details have been changed to protect confidentiality